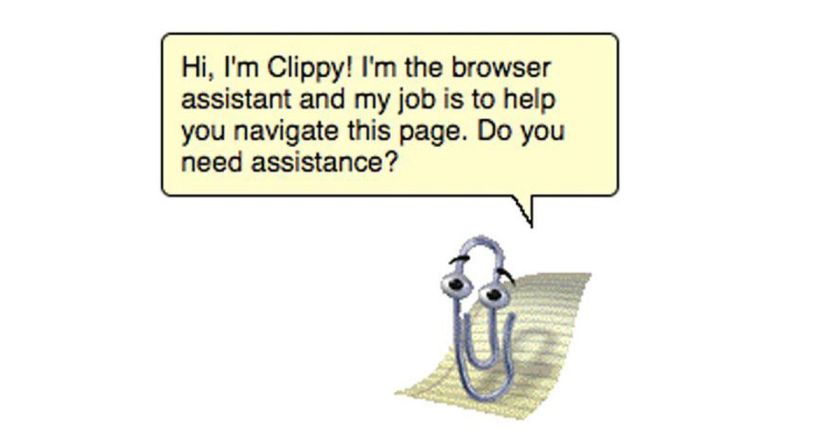 But if this has ever happened to you, you know full well that feeling of being called by the book, hearing that little voice in your head that says “oh come on, it’ll be fun”. And when you still hesitate to spend those precious two pounds on that nonsense you imagine the author’s photo on your bookshelf, next to Jane Austen, Agatha Christie and Isaac Asimov, and that’s it, you now need to buy it.

That’s more or less what happened to me the other day when “Conquered by Clippy” came up on my Twitter feed. While all my female friends were busy discussing how revolting the idea of a paperclip ever going near the most intimate parts of their anatomy was to them, I went straight to Amazon and was amazed by it. I’ve been a citizen of the internet since the late 90s and have seen my fair share of weird and disturbing porn, and not for a single second had I ever imagined someone could write a story about Clippy the paperclip. But it was real, it was there in front of me, and the cover was blowing my mind.

Take a minute and look at it. Isn’t it beautiful? [Note from Anna: No.] The simple, clear, basic title font. The subtle facial expression of the paperclip. And that look in the model’s eyes, you can clearly see she’s thinking “This is right. This is my big break. Mom will be so proud when she buys this book”.

I scrolled down the page to the comments and was rather surprised: this kind of book usually gets a huge quantity of one-star reviews, but not this one. Five stars all over the place, with a total average of four stars. With comments such as “Don’t ever stop making these”, “The most exciting paperclip-focused erotica I’ve ever read” and “Not sure what to rate this. Need a WTF rating”, I couldn’t resist anymore. I pressed the “Buy now” button and downloaded this masterpiece to my phone (I don’t have a Kindle and read on my phone. Bite me.)

Now I think it’s important, before moving on to a review of the story in itself, to talk about the pricing of this ebook. It is sold on Amazon for £1.99/$3.57/2.99€, which I find rather expensive. For that amount of money, there are quite a lot of other ebooks available, most of them very well written and/or very entertaining. Conquered by Clippy is only 24 pages long and uses a very large font, so the whole thing only has about 3500 words in it, which took me about half an hour to read with only one hand (the other holding a biscuit, obviously). That’s not a lot of words for £2.

To compensate for the shortness of the story, the author also added two other tales to the eBook: Humping the Hambandit, a sexy parody of the McDonald’s Hamburglar, and Pounded by Pluto, a weird erotica about Neil deGrasse Tyson having sex with Pluto, the infamous dwarf planet. Don’t ask me anything about those two stories, the pictures associated with them killed any sort of motivation I had in reading them.

Also, Conquered by Clippy is part of a trilogy, the Digital Desires Inbox. You can get all three in a deluxe premium box set for £12.56 in the UK or $20.58 in the US. If I were you, I wouldn’t buy them.

So, what’s Conquered by Clippy about ? Christie Aackerlund is a young and independent American woman: she packs her own bags at the grocery store, she opens doors without waiting for a man to do it for her and she takes the stairs instead of the lift. She even hates wearing glasses for some reason, but has decided to do so because life is better when you can see it. Not much else is said about her, except that she has a super power: she can speak to objects. I don’t know about you dear reader, but I for sure have done things in front of objects, with objects or even to objects that I don’t really want to talk about, especially not with them. But Christie doesn’t have a choice, and so when she looks into the mirror and says “looking good”, the mirror usually answers “thank you”.

The story starts when a certain Phil Gates sends her an email, asking her to study an alien artifact in the Silicon Valley. Being young and adventurous, she obviously accepts and flies with Phil to California in an helicopter. I have to admit the description of the flight does do justice to the American countryside, its beauty, diversity and greatness: “(…) they flew over the United States, with all its trees and buildings and rocks”. I myself once flew from Washington DC to San Francisco, eyes glued to the window, taking in all of America in six of the most intense hours of my life and must admit that “trees, buildings and rocks” does sum it up quite nicely.

The helicopter then crashes and nobody cares, they then get on with the story.

The character of Phil Gates is one of the worst men I have ever seen in any book I have ever read. He’s like a fat pervert Christian Gray with all the money but none of the charm or mystery. He stares at Christie’s breasts at any occasion, comments on her body and doesn’t stop asking her to cuddle for absolutely no reason. He also has a Windows Phone 8.1 smartphone, which is just ridiculous and the sign that something’s wrong with his head. His whole character is nicely explained in one sentence by the author: “He was probably mopey because Christie had such good taste in TV shows, but wasn’t interested in kissing him”. I doubt any of you will like him.

Where was I ? Ah yes, the two of them crashed right next to the alien artefact and Christie starts looking around. That’s when Clippy comes into the story.

Some of you may not be familiar with Clippy, so let me explain him to you. After 1995, personal computers became really popular, and people all over the world started buying them and trying to use Microsoft Word. Sadly, it was slightly more complicated than the standard typewriter and a lot of people were getting confused, so Microsoft created Clippy, a paperclip with big googly eyes that came up on screen anytime you were trying to do anything, asking you if you needed help. Everybody hated him except for my grandma, who thought he was cute and would talk to the screen, thinking he could hear her.

In this story, Clippy is a piece of alien technology. In his folded shape, he’s taller than both Christie and Phil, made of what looks like a thick steel rod and, just as in Microsoft Word, won’t stop asking Christie if she needs assistance. At first he’s an annoying but cute character, like Jar Jar from Star Wars: you don’t really like him but he comes in handy, telling Phil off because he’s a creep and helping Christie explore the alien ruins that were hidden inside the artefact.

But then the lights go off and he becomes creepier than Phil: “She reached for her tool belt, the weight of which was pulling her jeans down so that her red panties peeked over the edge. When she turned on her flashligh, she found Clippy in front of her, his camera-eyes aimed at her waistline. For once, he didn’t say anything. A small portion of her annoyance at the situation somehow turned into excitement, and she got a brief thrill from having Clippy’s inhuman eyes exploring her body.”.

I don’t understand how important the fact that her panties were red are to the story, but the author does mention it about ten times, so I guess I lack some kind of information. Maybe it’s because I’m a man and don’t know about this kind of stuff.

A few pages go by where the characters explore an office full of servers, and then Phil gets crushed by one of them. When Christie is about to get crushed too, Clippy saves her and then all hell is let loose. See, those servers that just fell down were connected to him, and were apparently in charge of controlling his sexual impulses. Now they’re gone, Clippy is horny: “Christie looked down, and she saw that the loose end in the middle of Clippy’s coil was sticking out. It was red and glowing at the end, as if his rod had been stuck in a fire. Clippy had a boner”. Hot, right? [Note from Anna: No.] This is the fifth time I read this extract and it still makes me moist.

Ok guys, let’s move on to the meat of the story, the bit we’ve all been waiting for, the awkward and badly described SEX. Apparently Christie has also been waiting for it: “Yes Clippy! Assist me! Assist me hard!”she says. Finally, some action!

Clippy, clearly frustrated of not having assisted anyone since Microsoft removed him from Word in 2003, literally jumps on the occasion: “He sprung forward, bounced into the air, and landed inside Christies lady-socket.”. Lady socket. Yup. That is, I believe, the less errotic way I’ve ever seen female intimacy being called. At this point I’m not sure if the author is a complete idiot who’s never been with a woman, one of those “incels” I’ve been hearing about recently, or if he’s just having fun describing the female body and sexual intercourse in the worst way possible. Take a look at this: “He got his end to vibrate like an Xbox controller as he twiddled the rim of her anus. At the same time, his other end pushed internal buttons she didn’t even know were there”. This could easily describe my last colonoscopy. Not sexy. Not sexy at all.

I don’t know how to describe the orgasm and post-orgasm scenes, so I’m going to copy past a few excerpts and let you enjoy it without my mediocre comments:

The story then ends with a twist: Phil isn’t dead, he’s a robot, and wanted Christie to have an orgasm with a robot and then tell the whole world that robots are great. Being the strong and independent woman that she was described as being, she doesn’t like that and goes back home. The end.

So,  what did I think of Conquered by Clippy? It was bad, real bad. I won’t comment on my arousal levels while I was reading it (or even writing this review), but as a short story it fails in absolutely every possible way. It’s expensive, short, with a bad plot, bad characters, bad writing and bad pacing. But what a laugh. Seeing the writing getting worse and worse, wondering how far down it’ll go and trying to imagine what was going through the author’s mind while he was creating this atrocity has made my week delightful. I can now go back to my own short stories, read through them once again and think “man, if he can make money out of that, maybe I should stick to it”.

That’s it then: don’t buy it. If a friend of yours has it and you want to laugh for a few minutes at something horrible, go for it. Also, if you write erotica, remember this: never, ever try to describe the sound of a penis coming out of an anus. It’s gross.

Look forward to future blogs where Matthew and I will finally be finishing the serialised review of Helicopter Man Pounds Billionaire Dinosaur Ass, another modern classic.