This weekend I was minding my own business, browsing Steam for a new game, when I was selected from the October labour lottery to be a border guard between a newly-created Communist state and the capitalist scum on the other side.

The two countries have just finished a six-year war. Terrorists, wanted criminals, and suicide bombers will be trying everything in their power to get past me. 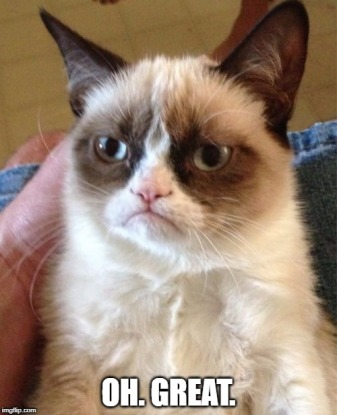 As the makers of my new game, Papers, Please, explain:

Congratulations.
The October labor lottery is complete. Your name was pulled.
For immediate placement, report to the Ministry of Admission at Grestin Border checkpoint.
An apartment will be provided for you and your family in East Grestin. Expect a Class-8 dwelling. [Anna’s note: Class-8 roughly translates to ‘shit hole.’]
Glory to Arstotzka

The communist state of Arstotzka has just ended a 6-year war with neighboring Kolechia and reclaimed its rightful half of the border town, Grestin.

Your job as immigration inspector is to control the flow of people entering the Arstotzkan side of Grestin from Kolechia. Among the throngs of immigrants and visitors looking for work are hidden smugglers, spies, and terrorists.

Using only the documents provided by travelers and the Ministry of Admission’s primitive inspect, search, and fingerprint systems you must decide who can enter Arstotzka and who will be turned away or arrested.

Playing turned out to be a surprisingly psychological experience, and I learned a lot.

1. Having a family is an inconvenience. Especially sick children who won’t stop whinging.

I apparently lumbered myself with a family before accepting this job. I checked all settings, and there’s no way to get rid of them.

Even worse, the freeloading gits expect food AND heat AND my kid keeps whinging that he’s “sick” and needs “medicine.”

Bitch, I earn 5 rubles (or whatever) for cross-referencing 30 billion separate pieces of information on a traveller’s documents, and you want heating, a bowl of borscht, AND frickin’ antibiotics? Nah, bruv. Stop sponging and get a bloody job. 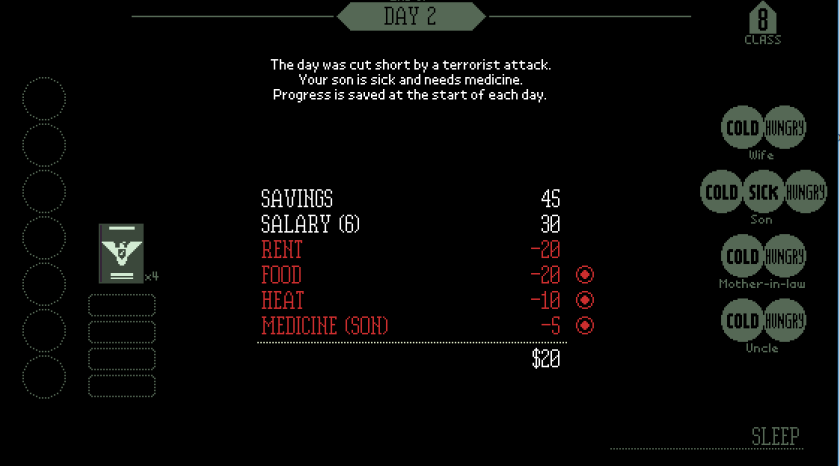 Just look at that. I earned 30 rubles with the sweat of my brow, and had saved up 45 through toil and sacrifice, and now I have just 20 because of my ridiculous so-called family. Doesn’t it just break your heart?

And why the hell am I supporting my mother-in-law and uncle? At least my wife makes me a sauerkraut sandwich to get me through a hard day of stamping visas, and at least the kid… well, being sick all the time, he probably doesn’t run around annoying the neighbours. But Mama Babushka and Uncle Vlad the Idle can fuck off to the labour exchange like I did.

2. I’m a really good border controller and have probably missed my calling.

I make a pretty good living as a writer but damn, I might be in the wrong career.

For example, I expect your poor untrained eye can’t tell that only one of these passports presented to me is real, and the other is a crude fake: 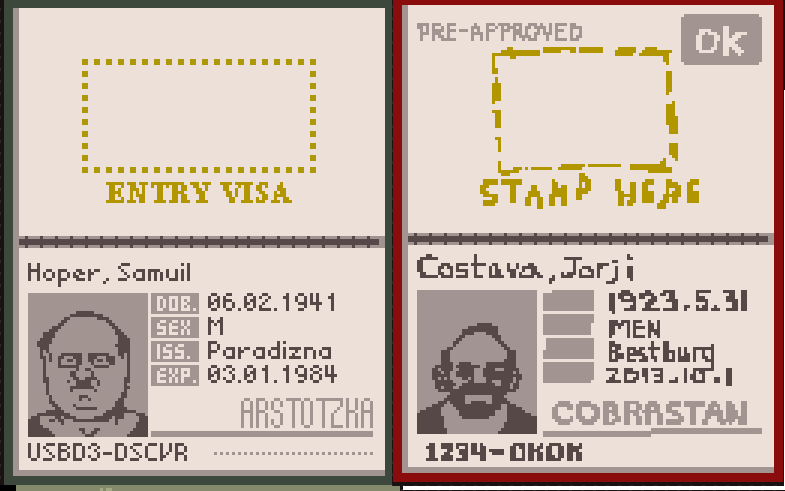 Allow me to explain, as you’re probably perplexed – Cobrastan is not a real country!

Your eagle eye might not have spotted that, but that’s why *I* am protecting Arstotzka’s (glory to Arstotzka) borders and not you.

Some people aren’t convinced about my brilliance. 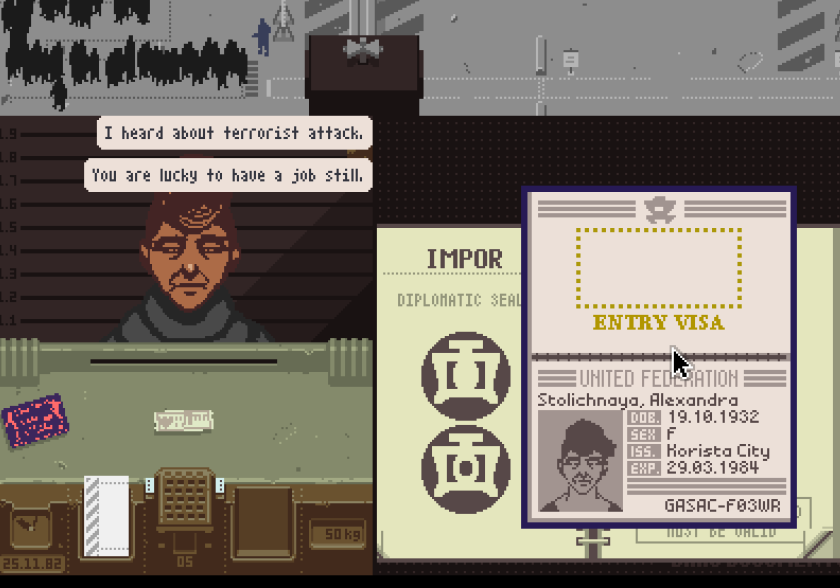 Is it fair to make a dig at me for making a mistake at work? Haven’t we all done it?

So I let one little terrorist into the country. I notice she doesn’t mention the literally tens of people I’ve let through who HAVEN’T gone on to murder anybody with suicide bombs.

Yes I did notice that he had a criminal record, thankyouverymuch. I AM a professional. But he said it was for jaywalking, and when I asked about the bulge in his pocket he said it was a banana, so EXCUSE ME for being a nice person and giving him the benefit of the doubt.

You try spotting terrorists when you have a sick kid at home and your mother-in-law keeps blocking the toilets because of her borscht allergy.

Anyway, proof of my achievements (and the proudest moment of my life): 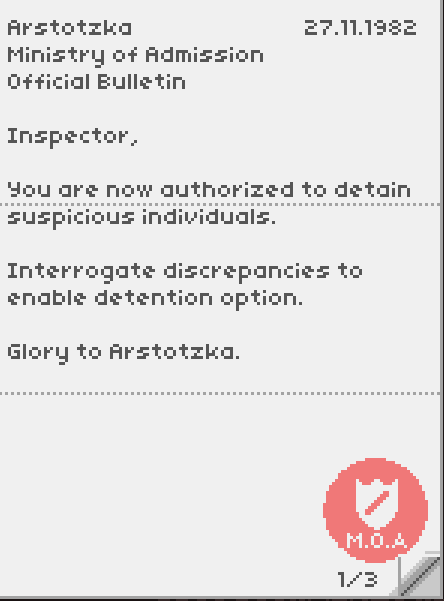 3. Rules are good and anyone who disagrees is up to no good.

Yeah, yeah, it’s fashionable these days to moan about rules and rage against the machine etc. etc.

But without rules, where would we be?

Without my rulebook, how would I know if people from Obristan are allowed in on 7 November 1982? How would I remember if nationals need ID cards as well as passports today, or if foreigners must present an entry permit in addition to a work permit? 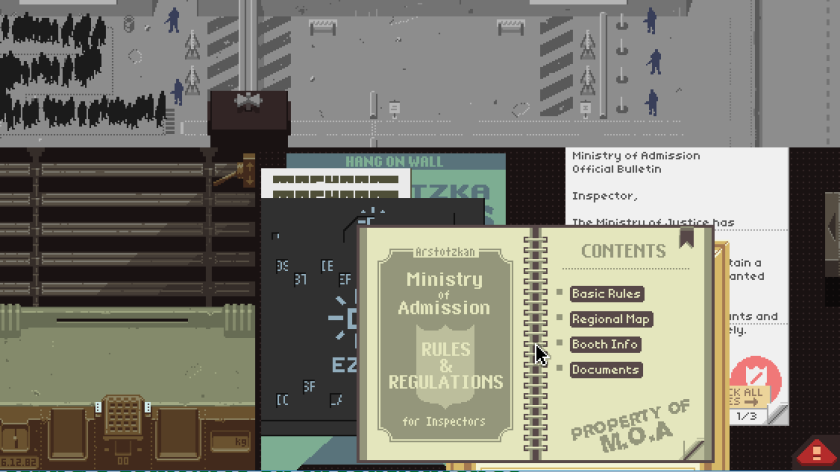 I get a little tingle of pleasure highlighting a rule in my book and telling an impoverished refugee why they will not be admitted to Arstotzka (Glory to Arstotzka).

Of course, they inevitably start whinging that they’ve been queuing for 17 hours, or their 3-year-old child is across the border and needs its mama, or they’ll be killed if they return to Kolechia. Yawn. You know the rules, so stop whining.

And who objects to rules anyway? I’ll tell you. Those people trying to smuggle 73 tonnes of semtex into Arstotzka (Glory to Arstotzka). Those whose passports are for 12-year-old girls but who are 6’5″ lumberjacks with crows’ feet and a bushy beard. Those whose entry passes show an official Arstotzka (glory to Arstotzka) stamp 2mm outside the regulation 3mm-from-the-top-right-corner.

Criminals like them have no appreciation for order and honesty.

I don’t know why Kafka’s work is  mislabelled as dystopian. His characters know where they stand if they bother to read the rules – sounds pretty great to me.

4. I’m uncomfortable being propositioned by 51-year-old prostitutes who look like the love child of Mick Jagger and the Dalai Lama.

I’ve never been propositioned by any kind of prostitute in the decadent West, so this was an interesting experience. 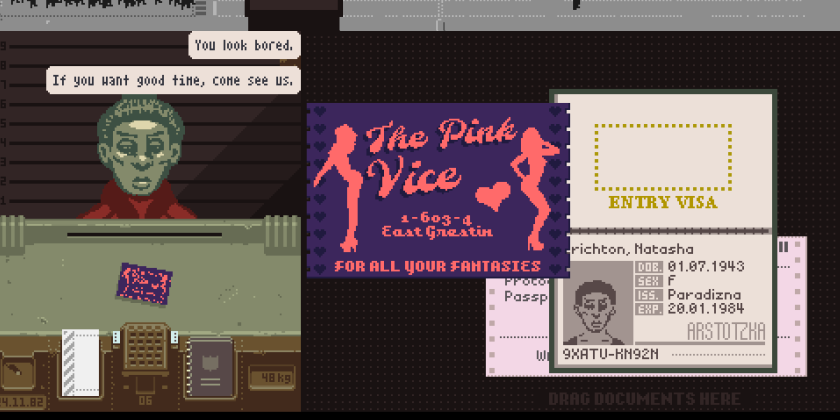 I’m sure Crichton, Natasha is a lovely person but she appears to be an elderly Buddhist priest in person, Mick Jagger after a rough night in her passport photo, and more closely resembling Rasputin than the silhouetted ladies in her flyer.

Still, beggars can’t be choosers and her rates were very reasonable, so I let her through and agreed to pop over when my shift finishes. The kid will have to go without the antibiotics tonight.

5. Appearances are deceiving, and you can’t tell who’s good or bad from rumour.

Aw, you might say. Nothing suspicious, except that she looks alarmingly like my new friend Crichton, Natasha. A nice maternal type wanting to visit her pride and joy, her only son, who was torn from her six years ago by the war, and who she has pined for every day since. Stamp her through, I hear you say.

But see, this is why only HIGHLY TRAINED people like me are allowed The Stamp.

We have a problem:

THAT’S RIGHT. She was cleared for entry by 10 October and it is now 26 November. There’s only one sensible response to that. 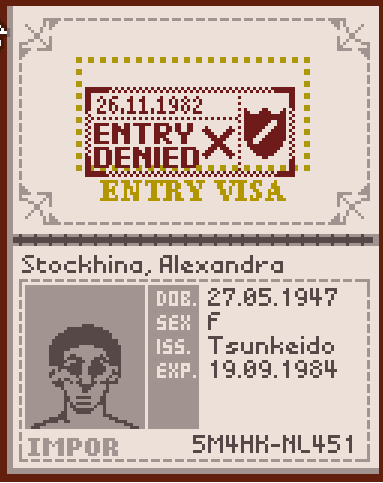 Yeah, yeah, she brings out the sob story about having to hobble through snow and the dead corpses of her other children to get to the border. But a heinous criminal would say that, wouldn’t she?

And when she shuffled out, crying into her torn handkerchief and tripping on her arthritic feet, we know what she was really crying about: me thwarting her terrorism plans.

Let this be a lesson to you. The rules are there to protect us.

Exhibit 2: This old couple. The man was very pleasant to deal with: 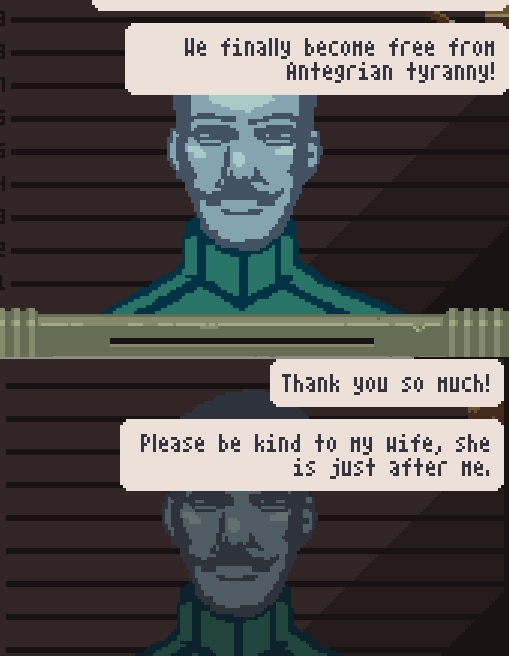 Everything was in order, so I let him through.

Then the wife appeared. 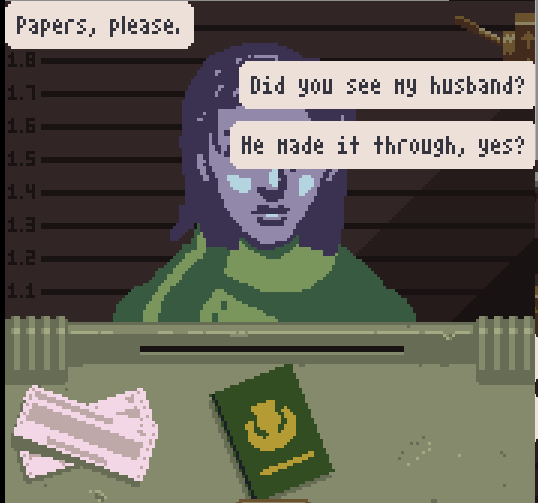 Nice woman, you think? Concerned about her husband?

Think again. Take a look at her papers and my beloved rule book.

I do the sensible thing and interrogate her at gunpoint. 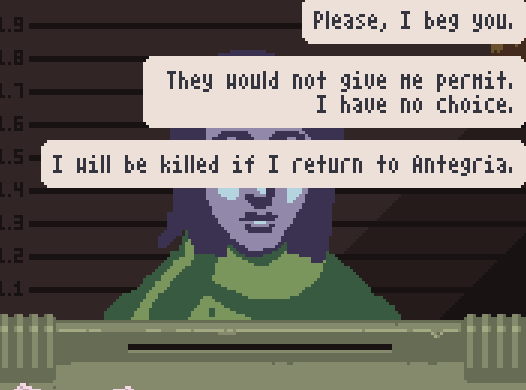 Always ready with an excuse, the old terrorists.

Back to Antegria you go, Katya.

Who would’ve thought she’d be so damn devious? 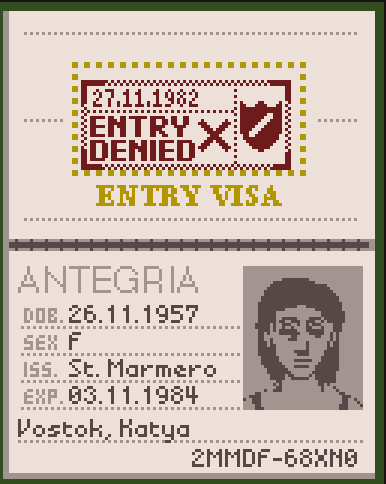 Exhibit 3: It works the other way too.

This lady had her papers in order, but as she entered she slipped this through to me: 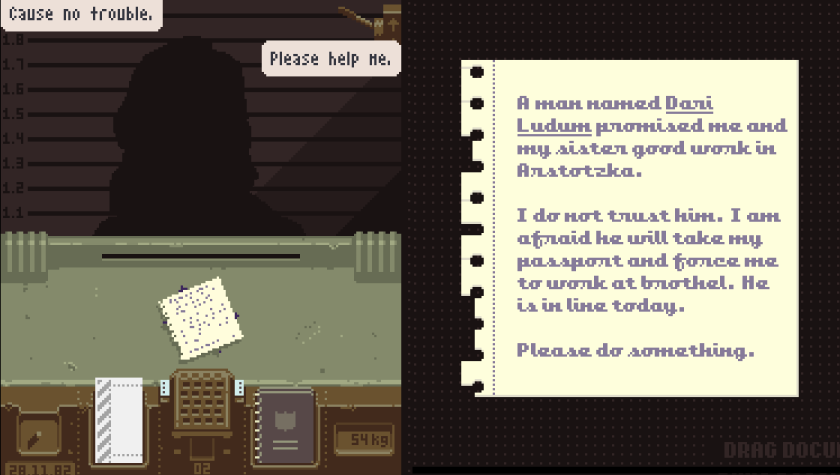 I felt very sorry for her and kept an eye out for this Dari Ludum.

And yet, when he came through, all his papers were in order! 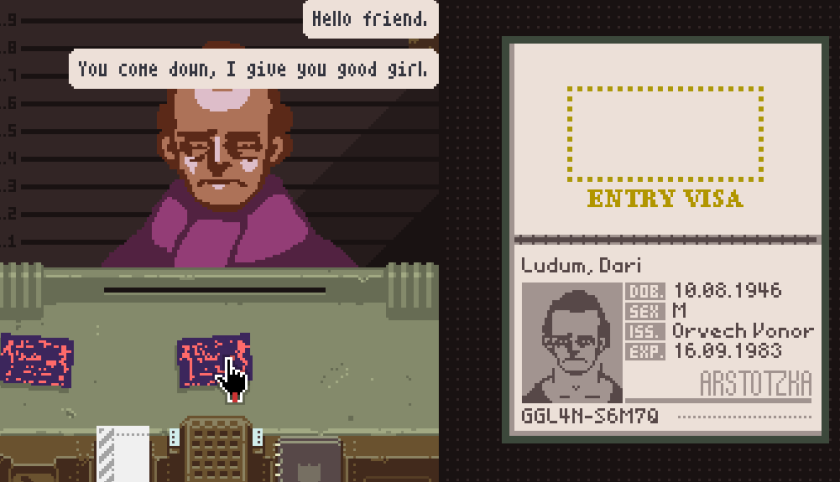 Obviously there was no reason to detain him, so: 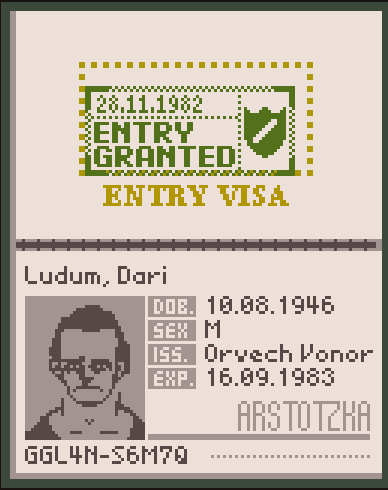 If I’d listen to that woman, I would have detained an innocent man for no reason. Close call!

I think I would do really well as a Communist border checker, and I don’t understand why “Kafkaesque” is supposed to be a bad thing.

Also, I haven’t managed to conquer the game yet because of some *financial irregularities* but, on the plus side, the freeloaders are with me in the gulag and have finally stopped being so demanding. 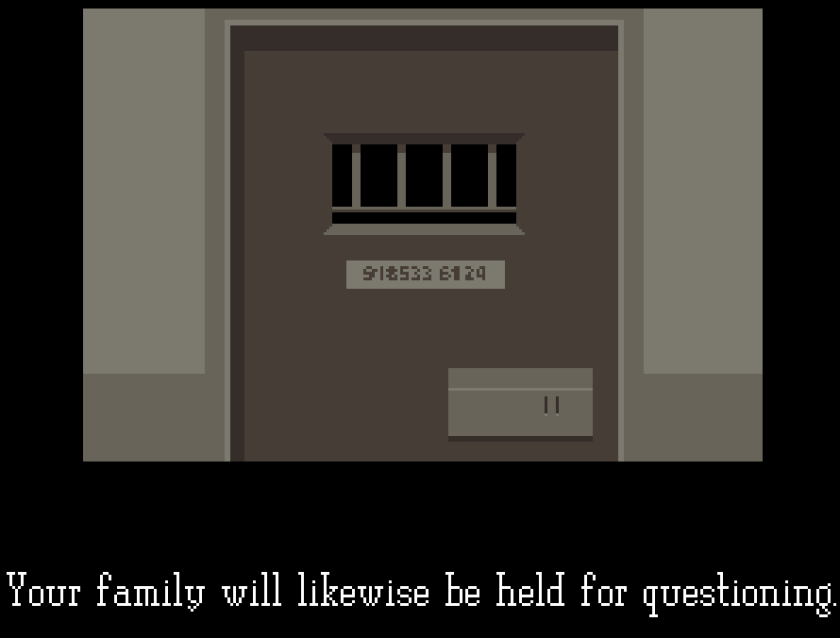 Silver clouds and all that.

N.B. The makers of Papers,Please did not give me a free copy of their game and haven’t even written to thank me for this wonderful blog which is sure to make sales skyrocket. If any game developers or other people what make things would like me to review their products, I am open to receiving free stuff and also bribes.

14 thoughts on “What I Learned Manning a Communist Border Point”