Twitter is a glorious melting pot of socially awkward people blurting out thoughts that probably should have been kept private.

In fact, not a melting pot because we stay strictly in our own homes, afraid of human contact, and would never become close enough to coalesce.

The point is, I love interacting with people on Twitter in exactly the way I hate interacting with 3D people in that horrible Outside place. My good friend Kim explains why in a much more eloquent and less sweary way than me in this blog.

So it makes me sad when people do things that force me to unfollow them.

Then why do I do it?

It was probably one of these things:

They were invented by Satan to make humans turn on each other and bring about the apocalypse.

Do not use them.

“Why?” I hear Auto-DMers ask in their plaintive, hurt little voice, like a sweet child being denied chocolate.

Well, first, know that I collect and drink the tears of sweet children.

Second, know that auto-DMs ares the equivalent of meeting somebody at a party, whipping out your phone, and playing a recorded message at them. If you wouldn’t do that, DON’T DO IT ON TWITTER.

We know these messages are automatic and not written for us – i.e. not a genuine attempt to connect, but a lazy-arse choice that shows the DMer is more interested in saving their time than actually getting to know us. I have no interest in boosting their (or my) follower stats. Gaining followers on Twitter is incredibly easy – I could have 50,000 within a week if I wanted them (and so could you). The point of Twitter is to connect on a deeper level than being a 1+ on somebody’s profile stats.

The worst auto-DMs are the ones that say some variation of, “Hi! I published my first book on Amazon last year. It’s a heart-racing tale of espionage that will keep you up reading all night. Buy it here [LINK].”

Since I follow a lot of authors, I get a lot of these.

First, anything that reduces the number of minutes I spend asleep should GET IN THE FUCKING SEA, and second, you’ve just walked into my house and shoved a low-budget billboard in front of my face.

I am a person, not an advertising opportunity. You get in the sea as well, you epically impolite douchecanoe.

Actually, I take that back. The WORST auto-DM I ever got was a writer announcing she was planning to publish an anthology, and would I donate to ‘crowdfund’ her endeavour? The money wasn’t even to commission cover art or editing. It was to pay her a “salary” while she wrote.

As a very clever person pointed out on Twitter, and as all authors will agree with: nobody likes form letters. So why would you send them?

They Spam Their Own Feeds, You Incompetent Village Idiots

Again, these facepalm-inducing people are a staple of the Twitter author community. They spam their own feed with multiple “BUY MY BOOKS!” tweets a day, turning their Twitter into a rolling billboard of RANDOM words in CAPITALS and $$$ signs.

How about you tweet something interesting/funny/well-written and pique my interest in reading more of your work? Oh, that’d take too much effort? Then why should I put any effort into clicking your goddamn link, arsewipe?

There’s also the less selfish variety who spam their own feed with other people’s ads, or even other people’s non-ad Tweets. If you retweet hundreds of tweets a day, you really think your followers aren’t going to unfollow or mute you?

Would you watch a TV channel that consisted only of ads? All day, every day?

Hell no. And I say that as somebody who watches videos of patios being jet washed. It’s really satisfying, okay?

We put up with ads on TV because there’s quality content in between them – content we want to watch. It’s the same on Twitter. You can advertise your work/products/whatever, but you have to balance it with non-promotional content.

They Don’t Have an Avatar or Bio

There are a lot of bots, spammers, and fake profiles on Twitter. If you don’t have an avatar and/or profile, I’m going to assume you’re one of them, and why would I follow you back?

It doesn’t have to be your face or your life history. Just put a picture of a nice cat and a few words about your hobbies or interests or whatever.

In fact, I’m MORE likely to follow a cat than a human. Humans are weird looking.

I’m always amazed that people pay for those “buy 5,000 Twitter followers!” things, because it’s so easy to do it for free. Follow 2,000 people and within a week the majority will have followed you back. Lather, rinse, repeat, and you can have as many followers as you like.

It’s a pretty pathetic thing to do, akin to a high school popularity contest, but whatever.

Even more pathetic is the ones who want to be followed without following. I guess it gives them illusions of popularity to have loads of followers but few followees – like many celebrities.

Dude, if you want to feel like a celebrity, just stand in front of your mirror with your mum’s favourite ornament and pretend to be accepting your Oscar. Don’t subject the rest of us to your delusions.

But no, what do these people do? They follow as many people as they can, sit back as the follow-backs roll in, and then unfollow everyone. This leaves them with a load of followers and few followees.

Don’t do it. Anyone with more than a few hundred followees has probably started to use a Twitter management tool to make it easier, and they will see that you’ve unfollowed them in your bizarre need for validation from strangers.

I will find you. And I will unfollow you. 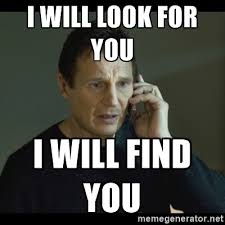 Time to wind down my ranting before I get in my car, or god help any small children who run out in front of me. It’s 50 whole points for a preschooler.

And despite the ranting, I do absolutely love Twitter. I’ve made some wonderful, wonderful friends, and spent some evenings laughing so much my ribs hurt.

Why do I love these people?

In short, they don’t use Twitter as a self-promotion tool. They use it as social media.

21 thoughts on “Twitterquette – Or Why I Unfollowed You”