I realised how British I am recently when I had (minor) surgery and was too polite to tell the doctor the anaesthetic hadn’t worked.

I didn’t want to worry her, and anyway, the automatic Brit response to any question is, “Fine, thanks.” or “Oh yes, lovely!”

Crying with pain at a massage, probably while wearing a Victorian-style bathing suit because good old British sexual repression

Masseuse: “Is the pressure okay?”

Two Brits in a restaurant

Brit 1: “There is an actual pube in my meal, under the mould.”

Waitress: “Hello! Is everything okay with your meal?”

Brits in unison: “Fine, thanks!”

In fact, there’s an entire Fawlty Towers episode based on the premise that Brits are unable to complain, in contrast with Americans. It’s 103% accurate.

But what about other stereotypes? Do we deserve them or not? I should probably put some sort of disclaimer that I don’t represent all Brits but this is my blog, and here I am King.

As this example of English gangsta rap explains:

“We’re not allowed to carry guns

As a result no-one gets killed

We can drink beer at eighteen

We love to drink those mothers chilled

That even beer can’t compare to some motherfucking tea.”

It’s not true that all of us drink tea constantly. Some of us do, for sure. My ex-boss Ivor (of ‘Rubber Duck Fetish’ fame) drank it pretty constantly. My nan drank it constantly when she wasn’t knitting or trying to determine if the handyman was “ambidextrous“. But I only have a few cups of tea a week, and I’d say only about half my current colleagues drink tea regularly.

But any Brit you ask will have an opinion on whether the milk should be put in before or after the water. This debate is so serious, in fact, that a scientist at Loughborough University carried out a rigorous study and determined that the milk should be put in first, or uneven heating denatures the casein which is detrimental to the taste. Douglas Adams, author of the HITCHHIKER’S GUIDE TO THE GALAXY TRILOGY OF FIVE agreed. So that’s settled, and anybody who tells you to put the milk in last is wrong.

Conclusion: Fair cop. Any country using university funds to settle a debate about milk application can fairly be accused of a tea obsession.

When I tell people which part of London I’m from, their reaction is usually (I paraphrase): “Really? You don’t sound like scum.” 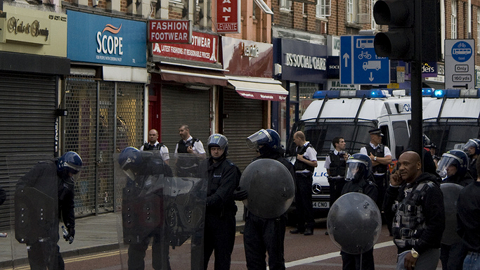 It’s true. I don’t sound scum, now. I most certainly sounded like scum until I realised I’d quite like to enter gainful employment and not be on first name terms with the local probation officers, unlike most of the people I went to school with.

But if I come face-to-face with a fellow Sahf Londoner, I will immediately break into Scum-English and be all:

Them: “Yo man, you know the PFC [a cheap version of KFC, because we’re not made of money in Lewisham and KFC is over £2 a portion] shop round here?”

Me: “Nah, bruv. Got shut down when that bludclot was murdered for teething a wing, innit?”

Them: “Allow it, man. I’m linking wiv my mandem there.”

Me: “Aw, shit. Try Kebabbies down Catford ends. They open again now they took that rat outta the deep fryer.”

–Fellow Lewishamer walks off. Human from my office approaches–

Office person: “Anna? Is that you?”

Me: “Why, hello Sebastian. One is looking rather dashing this good morn. Shall we partake of a panini and Frappuchino at the nearest artisan coffee establishment?”

Conclusion: Sorry, no. There are more of us speaking Scum-English than speaking Queen’s English. And even I, who’ve mostly trained myself to speak Home Counties English, am still told off regularly by my mother when I drop the T in “water”, or lapse into “Innits” when I’m tired.

Our Dental Hygiene and Appearance Leaves A Lot To Be Desired

The extent of water flouridation in tap water in the UK is much lower than in the US and New Zealand. I can’t be bothered to find out if this is because of UK people who believe blogs called EVERYTHING IS TRYING TO KILL YOU OMG OMG or other reasons. I also can’t be bothered to look into other countries. I only claim to be 103% accurate at horoscopes, not facts.

If you watch Jeremy Kyle [our version of Jerry Springer], you will conclude that a Brit’s trip to a dentist consists of:

Dentist: “How is everything?”

Brit: “Although I am pregnant by my boyfriend’s brother, who’s also his prison officer, and I don’t know what to tell him when he gets out in two months because his sentence for murdering my mother after she slept with his daughter is finishing.” 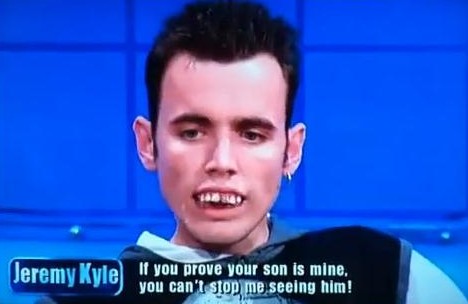 What’s really amazing is that these people are usually on Jeremy Kyle for some kind of love triangle, which suggests that at least one human in the world has found them sexually attractive. I’m all for a world in which appearances don’t matter but… dear lord, I don’t want a partner who’d sever an artery with a misaligned canine during foreplay.

On the other hand, I’m from Lewisham and even I wouldn’t go on Jeremy Kyle, so I’m pretty sure the guests on there are grown in labs and aren’t actually bona fide Brits.

My teeth? It’s a mixed bag. They’re so healthy that I’ve never needed any dental treatment – every six months I get a clean and polish (anybody else love the pink mouthwash?) and sent on my way with a smiley face sticker from the hygienist.

On the other hand, I have such crippling anxiety–probably from permanent spinal injuries from my massage therapist and the stress of not everybody understanding the scientific fact that the milk should go in first–that I grind my teeth all night while I sleep. So hard that I broke two of them. I now sleep with a mouthguard like some kind of really lazy hockey player.

Conclusion: I’ve only met one person in real life with Jeremy-Kyle-esque teeth, and she had a medical condition, so nope – this is going in the ‘false’ bin.

Queuing is a National Sport

When I was in my late teens – that magical time when we are carefree, rebellious, anarchistic, defying society – I got a train to college.

By my third day of commuting I had scoped the precise space on the platform at which the sixth pair of doors opened. I identified a mark on the platform where I could place the third toe of my left foot so when the train stopped and the doors slid open, I would be at the head of the queue to enter the train and claim my desired seat.

This worked for the two years during which I attended college. Success.

Bus stops are more complicated. Buses don’t stop at the precise same spot each time. The difference can be up to 116ft 20in if three buses are at the stop at the same time, which is fairly common in busy areas of cities. But Brits handle this, because We Know Queues. No matter how many people arrive at the stop and take up seemingly-random positions, we will all melt at once into a perfect queue at the sight of a bus. At the front are the elderly and infirm, starting with the one who arrived first. Behind are all the able-bodied, also arranged first-come-first-served.

One must join the end of the current queue, no matter how bizarrely the people in front have chosen to queue. 70ft from the desired object? It was their choice – suck it up and stand behind them. Even if it means you’re standing in the middle of road with articulated lorries swerving around you.

One must not stand near the queue if one is not in the queue. Nobody knows quite what you’re playing at and if we need to tut to indicate that you’re not queuing correctly.

If there is a queue behind one, one must complete one’s transaction at the desired object POST HASTE. No dilly-dallying. If delays are caused out of your control – for example, a cashier at a shop has run out of change and is seeking aid from a colleague – you should half-turn to the queue and shrug with a sheepish smile so they know it’s out of your hands.

I’m not going to bring the tone of this blog down by describing them.

Conclusion: You got us. Even the wildlife knows the rules. 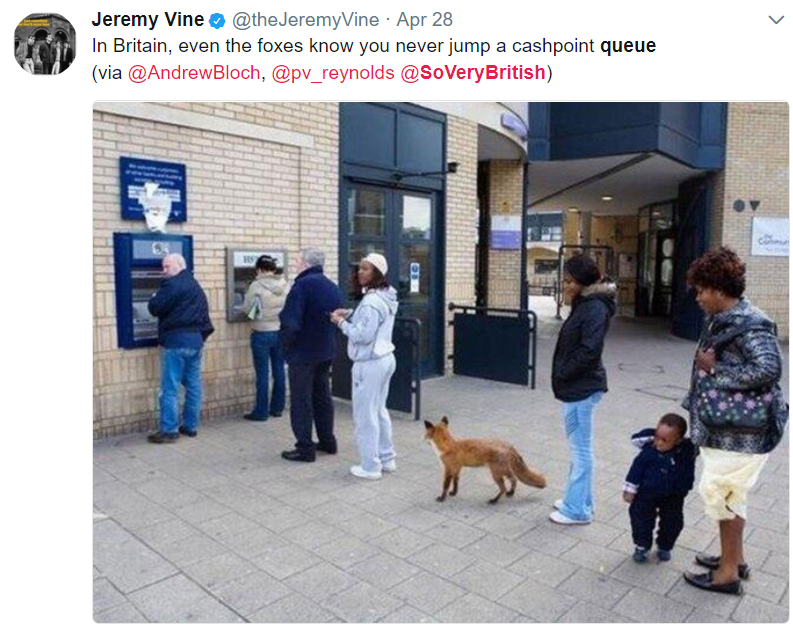 Have I missed any stereotypes that you want confirmed or debunked?