I don’t know who did it but I have my suspicions that it was this guy:

You know how he cursed the DADA position at Hogwarts so nobody could hold the post for more than a year?

He cursed me so I can’t own the same car for more than 18 months.

This is the story of my seven cars in eight years.

I bought my first car for £250 in 2008. It was older than me and made outraged spluttering sounds when I was unreasonable enough to try to make it move.

That was before Facebook and smartphone photos were such a thing (oh god I’m old, aren’t I?) and I have no pictures but this is pretty accurate:

I had to leave the house two hours early on cold mornings to “pull the choke out” (successfully avoiding ever learning what a choke was) and wait for the engine to melt back into place.

But he was my car and he was called Harold and I loved him. He was the only car in my household and I was ridiculously proud to drive my family around (these days I demand payment and make them sit in the back).

Christmas morning 2008 my mum and I skipped merrily down the garden path looking forward to a delicious and hilarious Christmas dinner at my nan’s. For an idea of the kind of day I was expecting, see Eccentricity: It’s in the Genes.

So imagine my disappointment when I arrived to a Harold-less car park.

Had I parked him somewhere else and forgot?

Did he in fact have magical powers of invisibility?

No. He’d been stolen.

It’s not really surprising since the lock comprised 98% rust and 2% spider webs but I thought thieves would target cars that, you know, they could sell. To people who weren’t desperately broke 19-year-old-students.

He was never found.

To be fair, my knee-length boots in the back were worth more than Harold, but I missed him. And I still miss the boots if I’m honest.

On the rebound I bought a £150 1991 Ford Fiesta called Jasper. This was still pre-Facebook-domination but picture this:

Jasper was a step up from Harold. He still had no power steering but hey, I had pretty good biceps by then. He still had a “choke” but it only took 1.45 hours to get him ready on chilly days. He was sort of grey-silver which is a nice reflective colour and reduces one’s chance of an accident which was pretty important since he had no airbags or, well, safety features.

I’m not entirely sure he had a floor.

He certainly didn’t have an alarm so I wasn’t all that surprised when I came back from a field trip with university to find him stolen.

Jasper was also never found. RIP Jasper. I like to think both he and Harold were taken to a farm and now live together.

By now I was travelling 50 miles a day on motorways, so it was time to move up in the world. I invested £1,200 precious student pounds on a curvy little red 1999 Ka called Veronica. She had power steering. She had airbags. She had an immobiliser, making her more difficult to steal.

She could get up to 70mph without being pushed off a cliff!

She was going 0mph, parked on my road minding her own business, when an 89-year-old neighbour crashed into her.

I heard a bang, I looked out the window, and thought, “Now hang on, I’m pretty lazy but I’m sure I didn’t leave her parked like that…” 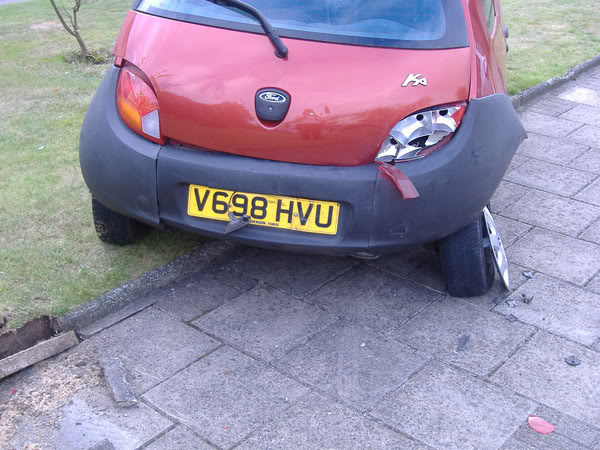 In fact, I’d parked her about 10 feet away with all her wheels pointing in roughly the same direction.

89-year-old neighbour was fine. Her licence was revoked but since she confessed that she’d “forgotten which one was the brake and which the accelerator” I thought that was quite fair really. I bought her some flowers.

I think the call centre lady was less impressed with my twatishness than I was. Still am. 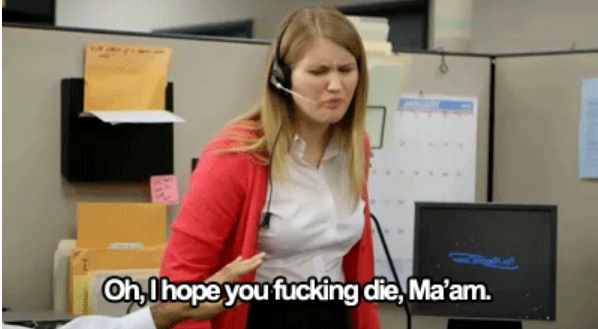 Veronica was not reparable. I received a cheque from Mrs 89 Year Old’s insurers and invested £1,500 English pounds in a 2002 Ka, Foxy.

I don’t have a picture of Foxy but picture Veronica, only blue and with fewer bits hanging off.

Well, she had fewer bits hanging off at the beginning. Then I went over a pothole at 10mph and the engine fell out.

According to my mechanic an engine falling out was quite serious and no, I couldn’t sort it out with a bit of superglue.

Whatever. I thought it was worth a go.

I was now married and Mr Kaling wanted to learn to drive (as readers of Arguments in Marriage will know, this is still an ambition in 2016). Assuming we’d be going out practising, I bought an automatic car so he didn’t have to worry about gears.

It was a £600 Nissan called Nessie. Have I mentioned in the blog that I’m a massive Loch Ness Monster fangirl?

I was back to 90s cars without power steering, airbags, or any apparent desire to move from point A to point B. I missed having a gearstick.

Mr Kaling only went out twice with me before, when I was driving him home from work, some utter prat in an Audi drove straight into us at 30mph. 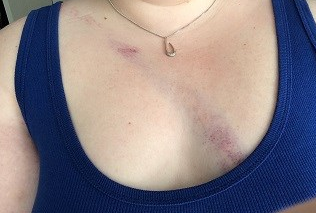 If I hadn’t been wearing mine, the force that created that bruise would have sent me through the windshield and it’s unlikely I’d be blogging. That’d be tragic for all of us but especially you amirite?

Mr Kaling was understandably put off driving by the whole experience and Nessie, now approximately half the length she used to be, went to live on the farm with Harold, Jasper, Veronica and Foxy.

RIP Nessie (but thankfully not me or Mr Kaling and not the Loch Ness Nessie who is totally alive).

I decided to go back to Ka cars. After all, I’d had great luck with them in the past!

Doctor B was £999 (I think the sellers paid less for the ad if it was under £1,000). He had a ridiculous personalised numberplate (T2 DRB) that made me ashamed to drive but at this point I was more concerned with safety than aesthetics and he was reflective, had an airbag, and wheels and stuff. I’m no expert but I think wheels are pretty important. 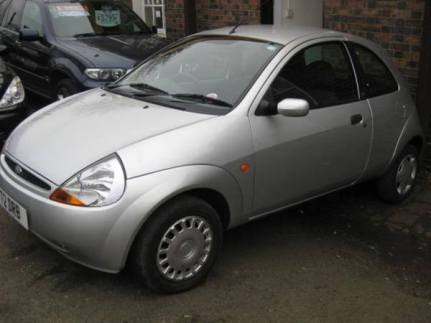 Doctor B was murdered by an 84-year-old who didn’t understand road markings and ploughed straight into me instead of waiting for a clear road before turning right.

No scary bruise pictures this time. I got away with a few days of whiplash and a weary resignation to browsing AutoTrader for the next week.

Just as Doctor B died, I received some good news. I’d been promoted at work for the third time and was now entitled to a company car. It meant I wouldn’t own the car, although it was for my exclusive use, so maybe the curse wouldn’t apply?

It meant I didn’t pay for insurance, maintenance, repairs or petrol. It meant I had £10,800 to spend on a car and thought OH MY GOD DO THEY EVEN MAKE CARS THAT EXPENSIVE?!

No, my employers did not know my car history when they offered me a company car. Shh don’t tell them.

I chose Claudine. Claudine is a gorgeous little 2014 Citreon C3. She’s ink blue. She tells me, with correct grammar, when she needs to go to the doctor for a physical. She warns me when there’s a risk of ice. She provides excellent lower back support and we’re coming up to our 1 year anniversary. 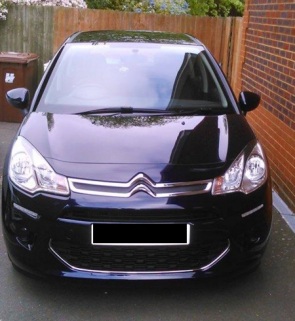 9 thoughts on “The Curse: Seven Cars in Eight Years”